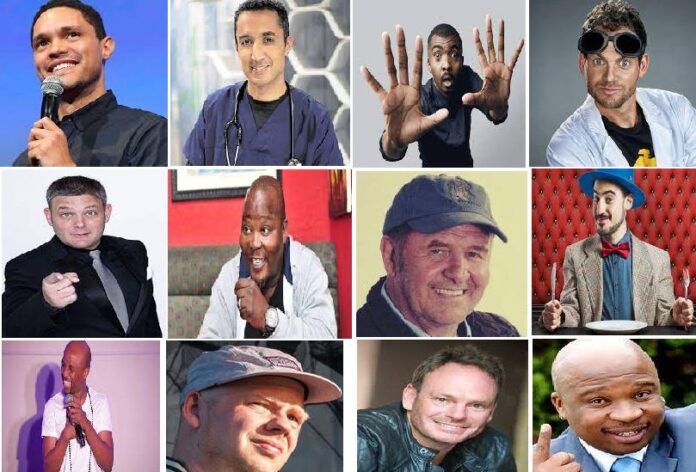 Laughter, they say, is good food for the soul; hence, comedians put in a lot of effort to make one laugh.

The ability of a comedian to lift the mood of an audience often flows naturally, and South Africans have the best funniest comedians with such prowess and the list are as follows:

Another famous African comedian is Trevor Noah from South African. He is also an actor, political commentator, and television host.

He was born in Johannesburg and began his career in 2002 in South Africa, and ever since then, he has had many host roles with the South African Broadcasting Corporation (SABC).

He was privileged to create and host the late-night talk show “Tonight with Noah” between 2010 and 2011, which was aired on Mnet and Dstv and has hosted several other shows like South African music and television/film awards etc.

Noah, whom people call the host of the daily show, has appeared on American late-night talk show and English talk shows, and by 2014 he got the senior international correspondent for the daily show. In 2015, he succeeded john Stewart a long-time host dating as far back as 2015.

Noah, the host of the 63rd annual Grammy award, has won numerous awards from nominations.

Additionally, Trevor released a book that is a New York Times bestseller titled “Born a Crime in 2016, and the content of the book centers on his personal story about how difficult it was to grow in South Africa during the apartheid days.

Noah gave the readers an intimate look at the world that shaped him; all in all, the tender, hilarious true-life story still has a bit of laughter in it.

Riaad Moosa is a South African actor, Doctor, and comedian. Mossa first started with a standup on campus in his fourth year at Cape Town, starred in 5fm comedy jam, and performed at the Edinburgh festival.

Growing as a child, Mossa had an eye for medicine and has spent six years training in medical school.

Eventually, he graduated from UCT and has worked as a medical doctor for three years. Moosa is a comedian that uses comedy to pass information especially on sensitive issues like racism, stereotype.

In 2007, he toured South Africa with an American Muslim comedy troupe, appeared in 3 wise men show, appeared in different television and film production, and performed in one of South Africa’s renowned standup comedy TV, “laugh out loud.”

Moosa has featured in crazy monkey straight out of Benoni, appeared in the sequel, and featured in the comedy film material and long work to freedom in 2005, 2007, 2012, and 2013.

Moosa Riaad has won numerous awards and is married to Farzanah Beat, and both live in Johannesburg with their two children Hanaa and Zameer.

Loyiso Gola is another South African comedian that is very funny.

Gola’s career came into the limelight after the appearance on SABC1 in the Phat Joe Live talk show in 2002, which after his subsequent performances such as Dinner with the president, Pure Monate Show, etc., emerged.

He’s the anchor of the TV series Late Nite News with Loyiso Gola on eNCA and eTV.

Gola has featured in four different films, has gotten international appearances, and has won many awards.

The standup comedian graduated from high school in 2002 and started smelling his roses immediately by winning the sprite soul comedy tour.

Nik is a South African author and comedian that has made some appearance on comedy shows.

The lad was born on 3 October 1997 and is married to a general practitioner Debbie Rabinowitz.

He has also gained international appearance in places like Australia, Canada, Holland, the United Kingdom, Zimbabwe, and the United States of America. Nik has an exciting book launched in 2012 titled South Africa: long walk to a free ride.

He’s one of the award-winning comic performers, and apart from self-written shows, he has performed on TV stage, radio, internet.

Alan is popularly known for his one-man comedy shows and has performed in the United Kingdom and the United States of America.

He has also performed in London at the standup south Africa comedy festival in 2002 and has participated in the Smirnoff international comedy festivals at cape town.

Alan has won three acting awards despite sharing his working hours between theatre and comedy, and his one-man show has lasted for more than 12 years with 1800 shows.

Nkosi is known for his wow performance in the soap opera Isidingo and his presence in the Toasty Show.

He’s a one-time cost of the SABC1 reality competition television series, host of the SABC2 world cup show 2010, and co-produced the sitcom Mzee was Two six.

By 2014, he hosted the eTV reality competition South Africa’s Kitchen Queens, where six women with the assistant of mentors confront each other weekly for a grand prize and, on the other hand, acquire some negotiating, budgeting, and cooking skills.

Nkosi has appeared in so many films and has hosted numerous shows with different categories of awards.

Leon Schuster is a South African filmmaker, presenter, singer, and comedian. His passion for making films started at an early age where he and his brother would prank their family and film it.

Schuster’s career started officially when he worked for the South African Broadcasting Corporation.

Schuster created the Afrikaans radio series Vrypostige Mikrofoon with Fanus Rautenbach and would have to disguise his voice and play a prank on unsuspecting victims.

Schuster is a singer that has released more than one album and has also won an FNB Sama Music Award for Biggest Selling CD with his hit CD Hier Kom Die Bokke in 1995.

He’s well-rated in South Africa that he was given the number 43 spot in SABC’s most extensive South African polls for his comic work.

Schuster has produced more than 15 albums with many film appearances.

Deep Friedman is the son of a political analyst. He studied philosophy and journalism at Rhodes University and finished his Postgraduate Certificate in Education at Wits University in 2010.

While he worked in journalism, He performed alternative folk music in Johannesburg before performing as a comedian. He turned to an experienced comedy after being named joint winner of Joe parker’s 2010 comedy showdown.

He also added more value to social media, especially Facebook, a good platform where people market their talents and skills by steadily updating the audience with career-related content.

Friedman has won a good number of awards and has also performed in so many comedy shows.

He received terrific audience numbers at his Edinburgh debut in 2015, and in 2017, Nkonzo made his Australian debut at the Perth Comedy Festival.

Tat’s light never got dim as he appeared at the Montreux Comedy Festival in Dubai, got a new show, Sorry not Sorry to his brand, after he completed a run of shows in Switzerland in the same 2018.

David Bateson is a South African comedian born in February 1960, and it’s known for providing the voice of Agent 47 in the video game series Hitman.

In the Hitman game series, Bateson gave a physical guide, provided the voice, and appeared as agent 47.

David Bateson has appeared in more than thirty-five films and nine video games.

Ben Voss is a South African actor, satirist, and comedian. He has been a playwright since 1998, and he’s very much known for depicting fictional businesswoman Beauty Ramapelepele.

Despite holding a degree in Mechanical Engineering and a Postgraduate degree in Human Resources at the University of Natal, Voss still built a career in acting, established a production company where he produced and performed comedy skit shows.

Ben has written and featured in hit skit shows like Green mamba in 2006, Black mamba in 2008, and mamba republic in 2017. it’s a show that toured in more than ten countries and has collected all the major theatre awards in South Africa.

The award-winning comedian has contributed immensely to the South African comedy circuit.

Desmond Dube is known for Hotel Rwanda 2004, how to Ruin Christmas, a TV series in 2020. He was a one-time mime artist and entertainer before he ended up in music and comedy.

Dube was born on 25 January 1967 and is married to Tlotliso with two kids. He has some notable accolades like the Avanti Award, Academy Award, and many others.

South African comedians are in a better position for a laugh out loud. The thread of funniest South Africans comedians above can elate one from a stressful day and bring life to shows just by listening to them.